When you wash dishes, flush the toilet, or take a shower, the wastewater has to go somewhere. In years past, that somewhere was directly into a river or stream. Untreated. If that sounds rather yucky, it is. Sewage treatment is not quite a century old. In fact, in many places around the world, raw sewage is still being flushed into rivers and streams.

Although we might not think of them that way, sewers and wastewater treatment are forms of pollution control. Sewers take wastewater from its source and then transport it to treatment facilities where it’s cleansed of impurities and released back into the environment.

As we just mentioned, up until quite recently there was no wastewater treatment. Raw, untreated sewage was simply released back into the environment to be purified naturally. This worked as long as the amount of sewage released was minuscule compared to the volume of water into which it was released.

Back then, dilution was the solution and bacteria in the water helped get rid of the sewage. However, today there’s a lot more wastewater than there was back then, both from homes and from industry. In fact, we’re generating so much wastewater now that mother nature can no longer handle it. She needs help and that’s what wastewater treatment is all about. Wastewater treatment speeds up this natural process.

There are two stages of wastewater treatment, primary and secondary. During the primary stage, solids are removed. The second stage of treatment then continues this purification process. Let’s take a look at each one of them in more detail.

As sewage comes into the treatment plant it passes through a screen with a mesh fine enough to remove only the largest objects floating in the water. The sewage’s next stop is something called the grit chamber. Here, small rocks and gravel (typically from storm water) settle to the bottom of this chamber. At this point, the sewage still contains small pieces of solid matter, both organic and inorganic. These are removed when the sewage passes into the sedimentation tank. Here’s how that works…

As the sewage passes through the sedimentation tank, it slows down, allowing the remaining small solids to settle to the bottom of the tank. This sludge is called raw primary bio-solids. It’s removed via pumping and then either treated again and turned into fertilizer, or burned, or taken to a landfill. 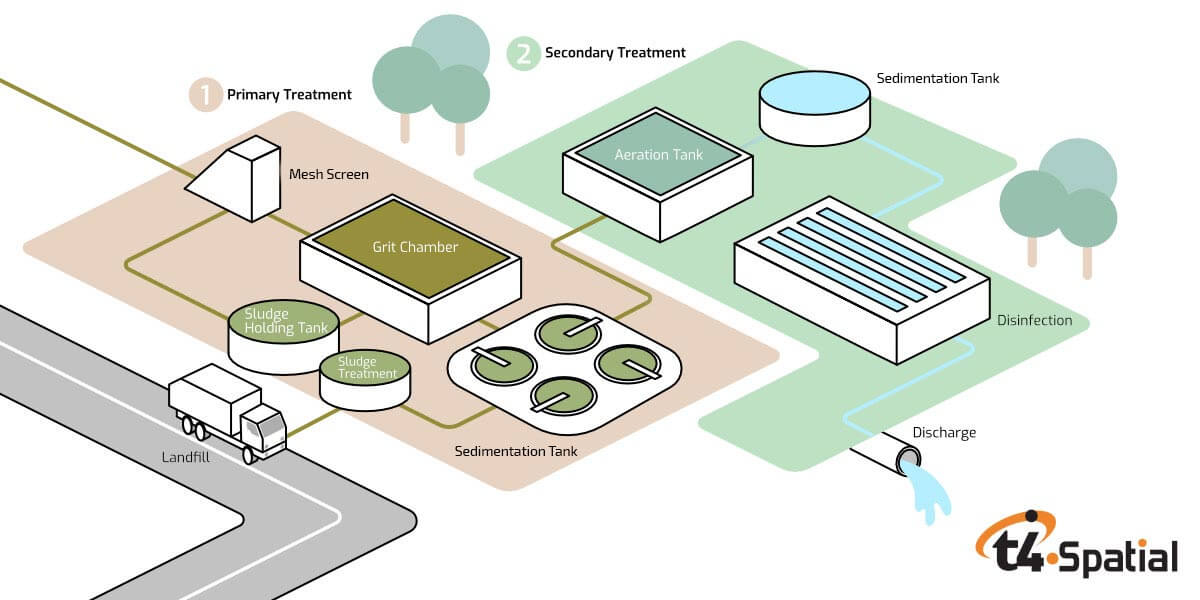 The second step in the wastewater treatment process uses the bacteria in the remaining organic matter to get rid of about 85% of the organic matter.

After the wastewater leaves the sedimentation tank mentioned above, it goes into a facility that uses either something known as a ‘’trickling filter’’ (a bed of gravel from 3-6 feet deep, or a special corrugated plastic) or a facility that uses the ‘’activated sludge process’’, a process that helps the bacteria work faster.

If the wastewater goes into a facility using a trickling filter…

The bacteria present in the gravel (or corrugated plastic) gobble up any remaining organic matter. After the wastewater leaves the trickling filter it goes into a sedimentation tank where even more bacteria is removed.

It enters an aeration tank containing both air and sludge. It stays there for several hours so the bacteria has a chance to break down and render harmless any remaining organic matter. It then goes into another sedimentation tank where even more bacteria is removed.

The final step involves disinfecting the wastewater using chlorine to get rid of 99% of any harmful bacteria still remaining. Sometimes, so as not to harm aquatic life, the effluent is treated with ultraviolet light or ozone instead and returned safely to the environment.

Today, there’s an ever increasing demand for high-quality water. That, coupled with the increasing number of pollutants that are difficult to remove from water, means we need to continue developing and improving wastewater treatment methods.

Get the Case Study
Schedule a Demo
Share this:

t4 Spatial’s Executive Vice President has over 10 years’ experience within the water/wastewater sector, specifically focused in municipality, contractor and engineering firm relationships that build and maintain infrastructure. For nearly 20 years his career has spanned several industries focused on business operations.