A Very Brief History of Sewers

The problem of too much human waste

Way back when we were hunter gatherers, we didn’t have to worry about sewage. We handled our waste in pretty much the same way that wild animals handle their waste. The problem of sewage arose once we started living in settlements. At that point we were tasked with figuring out how to get rid of large amounts of urine and feces.

Up until the middle of the 19th century, people were still doing their business in pits, outhouses, and, of course, chamber pots. These latter devices saved one the trouble of going out and finding a cesspit in the middle of the night. You simply squatted over something that looked like a soup tureen in the privacy of your bedroom and then emptied it into an open street drain or a cesspit the next morning. Suffice it to say, back then sewage systems were hard to ignore.

Of course, sophisticated latrines that used water to flush away human waste did exist in ancient times. The Babylonians, the people of the Indus Valley region, the Minoans, Greeks, Persians, and Romans, all had sewer systems of one kind or another. Also, there are people today in underdeveloped countries that still use pits and outhouses to relieve themselves.

Eventually the kind of sewer systems we recognize today started to be built. Although we were making progress, these new sewer systems still had the potential to cause disease because up until around the middle of the 19th century these combined sewers took the untreated sewage and just dumped it back into the environment, usually a river. This was, of course, a pretty smelly solution. So, pumping stations were developed to flush the sewage down the river. One of the first of these was the Milwaukee River Flushing Station, built in 1888 to flush the river with fresh water from Lake Michigan. You see, back then, big cities decided that dilution was the solution and there was no reason to treat wastewater.

While some cities today still use combined sewers, new sewer systems separate sanitary sewers from storm sewers. For more information about this see our article The Three Types of Sewer Systems and How They Work. 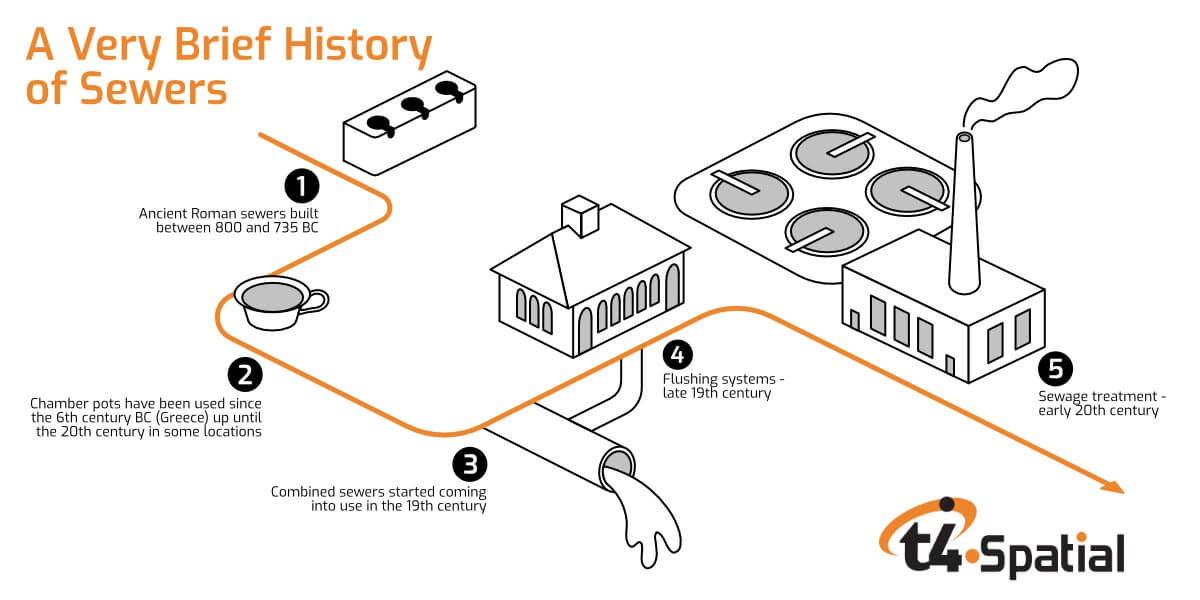 You really don’t want to drink the water

Up until the 19th century cholera epidemics killed large numbers of people throughout Europe and North America. For a long time everyone thought it was caused by bad air. That was until a man named John Snow came along. He discovered that the 1854 London cholera epidemic was caused by sewage in drinking water. Remember how we said that cities were flushing untreated sewage into rivers? Well, people were drinking water from these rivers and they died. In fact, one of the reasons John Snow began to suspect that water was the problem was the fact that people who only drank beer didn’t get sick.

So, we had only partially solved the problem of what to do with all that human waste. Yes, flushing it into the river got it out of the city streets. However, it was still going into rivers, untreated.

Wastewater treatment is the solution

In the late 19th century Milwaukee was emptying raw sewage into the three rivers that ran through the city. Unfortunately, there were too many people in Milwaukee for ‘’dilution as a solution’’ to work. So, engineers decided to flush the rivers periodically with water from Lake Michigan. It worked – to a point – but there was still untreated sewage flowing into the rivers. What to do with it?

Milwaukee’s first attempt at recycling human waste happened in 1913 when the city built a sewage treatment facility on Jones Island. It treated 85 million gallons of raw sewage every day and used a new technology called “activated sludge’’ to turn raw sewage into elements like carbon, oxygen, and hydrogen. The end result is a sludge that’s about 75% organic matter. It’s then converted into something called Milorganite (Milwaukee Organic Nitrogen) which is sold as fertilizer.

In 1925 the Milwaukee treatment facility started treating other forms of waste as well and by 1935 it was treating around 200 million gallons of sewage per day. Of course, Milwaukee wasn’t the only city experimenting with ways to treat sewage. Los Angeles was another city turning human waste into fertilizer.

Today, sewage treatment has continued to improve in the US. We’ve come a long way from dumping untreated waste into rivers and lakes as a matter of course. Yes, it does still happen from time to time because of and continues to happen in certain underdeveloped parts of the world. Something to keep in mind if you’re traveling to those areas.

Get the Case Study
Schedule a Demo

For more information about sewers see,

The three types of sewer systems and how they work
How a 19th century sewer GIS was used to fight cholera
What is infiltration and inflow?

t4 Spatial’s Executive Vice President has over 10 years’ experience within the water/wastewater sector, specifically focused in municipality, contractor and engineering firm relationships that build and maintain infrastructure. For nearly 20 years his career has spanned several industries focused on business operations.